UPDATE: the 1st edition of HaBaFive U14 has been postponed until a later date due to the coronavirus emergency

Waterpolo Development moves the boundaries of HaBaWaBa world even further starting HaBaFive U14, a new competition dedicated to 14 Under players (i.e. born in 2006 and following). Its 1st edition will took place at Bella Italia & EFA Village in Lignano Sabbiadoro (Italy), on September 2020, from 2nd to 6th. The event will have two separated tournaments: one for boys and one for girls. HaBaFive U14 is designed for an age group composed of boys and girls who already have a bond with waterpolo and who are ready to evolve as players. In addition to the spread of the noble values of sport - first goal of every HaBaWaBa event - it’s the improvement of young waterpolo players’ technical skills that drove us to start HaBaFive U14: in order to reach this goal, experts of Waterpolo Development have introduced new rules to the usual HaBaWaBa regulation.   HaBaFive U14 innovations to usual HaBaWaBa rules: Number of players: in HaBaFive U14 teams are composed of a maximum of 15 players and a minimum of 10 Players, from which 5 players (4+ 1 goalkeeper) will be in the water at any time. Field size: The field of play should be 15 m x 12,50 m (max.) and 12.50 m x 10 m (min.). Possession time: the team in possession of the ball is limited to 20 seconds. Ten seconds rule: when a team regains the ball after the end of opponent team’s possession, all the attackers (except the goalkeeper) should pass through the half of the field within 10seconds. Should one or more attackers do not pass through the half of the filed the the referee should award a change of possession. Volley shot into 5 meter area rule: during the game when the teams are even, an attacker who enters inside the line 5 m without the ball can score a goal exclusively by receiving a pass at the air and not in the water. If he enters inside the 5m line swimming with the ball he may concluded by shooting to the goal. Volley penalty shot rule: penalty cannot be beaten by lifting the ball from the water. The player in charge will be able to shoot by receiving a “dry” pass by a teammate who is also in line on 5m and at least 2 meters away. 5 meter line shot rule: when an attacking player suffers a major foul due to an "illegal contact foul" outside the 5 m. line, he may shoot directly after “playing the ball”, he may pass or move in any direction and then shoot.   RULES OF HABAFIVE U14 2020   "Let's be clear, we don't want to change the rules of waterpolo - Waterpolo Development president Bruno Cufino explains -  HaBaFive U14 is created to promote the improvement of kids' individual technical skills. The waterpolo of the future will be faster and faster and it will need more and more skilled and technically complete players, with fast thinking and moving. Rules of HaBaFive push the players to be dynamic and technical skilled; they help the teams to be in few meters inside the pool for a choral participation in the game. They push players to be always well positioned on their legs both in receiving and passing the ball and they teach how to shoot keeping the ball high and to volley”. Why has WPD invented a tournament for 14U category? “After the age of 13 the ludic phase and first learning one end, and a very delicate period begins for every young waterpolo player.  The age of 14 is a time when details in learning are crucial - Cufino continues - everything you learn in this phase will remain in your muscle memory for the rest of your life. With these rules specially designed for HaBaFive we hope to make a contribution to raise the technical qualities of the kids and speed up their way of interpreting the game".   Registration will open at the end of March. 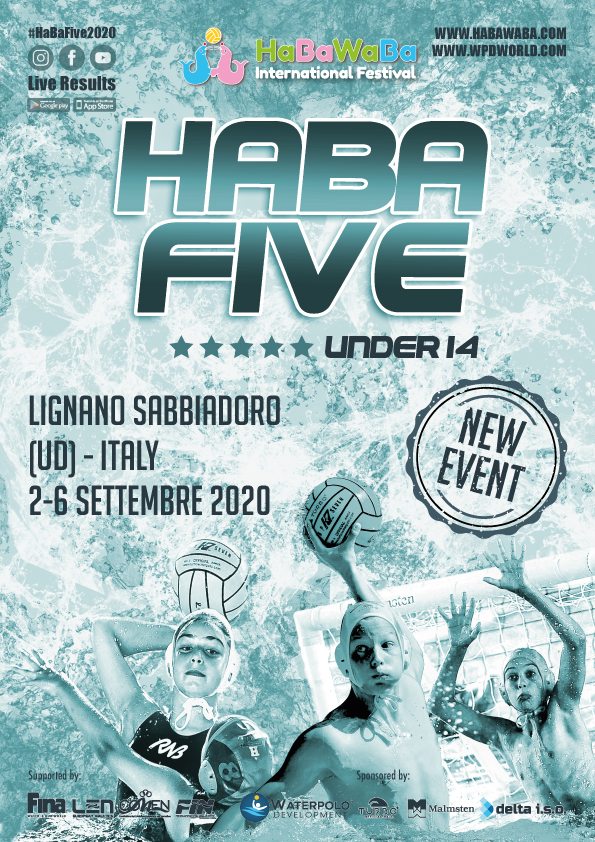